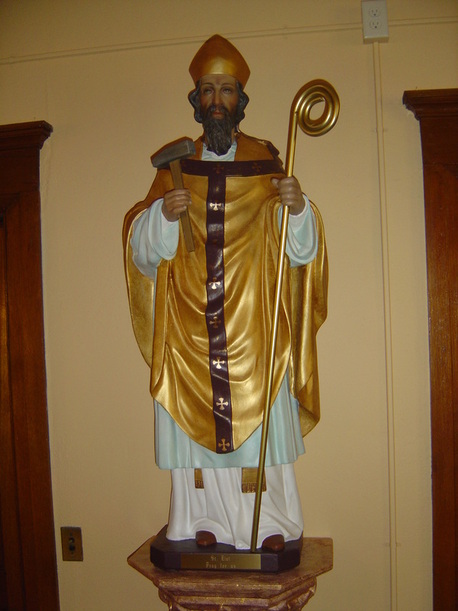 Feast Day December 1Start November 22Day 1Holy St. Eloi, renowned for your charity and compassion toward the poor, so much so that anyone seeking your dwelling need only look for a great gathering of the poor to find you…. pray that our hearts be made generous.    Day 2Blessed Saint Eloi, who as a bishop converted the hearts of unbelievers and heretics by your gentleness, humility and peaceful firmness proclaiming the truth……pray for us, that we may hold fast to the truth and proclaim it with a gentle heart Day 3Glorious Saint Eloi, who's counsel was sought by kings and ambassadors……pray that we maybe endowed with wisdom grounded in love of God.   Day 4Gracious St. Eloi, faithful attendant to the duties of the king’s court, yet ever more faithful to the King of kings……help us to be saints whose earthly life is in the world but whose home is in Heaven.    Day 5Admirable Saint Eloi, whose great skill as goldsmith earned you the position of master of the mint, and who adorned churches and shrines with beauty and devotion……pray that our souls be stamped with the image of God and that art that reflects the beauty of God lift our minds to heavenly contemplation.    Day 6Generous Saint Eloi, who ransomed captives and set them free and founded monasteries and convents……pray that we may be set free of vice and turn to God.    Day 7Compassionate Saint Eloi, you freed prisoners from earthly shackles of iron and from the spiritual bondage of demons and with great tenderness buried the dead……. pray that we may have the grace to exercise with tenderness corporate and spiritual works of mercy.   Day 8Gentle St. Eloi, blessed with the gift of tears, generously shed for men in joy as well as in sorrow, in shame and forgiveness……. pray for us for conversion of heart and conformance to God's Holy Will.    Day 9St. Eloi, with your hands you wrought beauty and with your heart you won friends and through both you glorified God. Befriend us, dear saint, and pray that we will use our God-given talents to serve Him. Amen.  Let us pray……Almighty God,You endow your saints with the gift of extraordinary love of God and love of Manand offer them to your people as examples of your faithful and unfailing help.As they have sought in their earthly life only the fulfillment of your Holy Will,as manifested in their concern for their fellow man and the spreading of your kingdom on earth,how much more is their longing in their eternal life for our good until all things are brought to completion.Grant, Oh Gracious God, that those who name as their special patron the humble Saint Eloimay be granted In Your Mercy, His special help and protection and the grace to imitate His holy virtues.to the Glory of our Lord Jesus Christ, who lives and reigns with You and the Holy Spirit forever.Amen.​

The Patron Saint Eligius  - (aka Eloi or Eloy)

What is the definition and the meaning of the Patron Saints and why were these people chosen to become patrons of causes, professions and countries? The term 'Patron' is used in Christian religions, including the Roman Catholic religion, to describe holy and virtuous men and women who are considered to be a defender of a specific group of people or of a country. There is a patron for virtually every cause, country, profession or special interest. There are two categories of saints: martyrs and confessors. A martyr is one who is put to death for his Christian faith or convictions.

The patron of Goldsmiths, Blacksmiths, Horses, Taxi Drivers  and Mechanics

Cause of Death: Natural causes

Who or what is Saint Eligius the patron saint of?
Saint Eligius is the patron of Goldsmiths, Blacksmiths, Horses, Taxi Drivers  and Mechanics. Meanings, definition and origins - a patron is considered to be a defender of a specific group of people or of a nation. There is a patron for virtually every cause, profession or special interest. Prayers are considered more likely to be answered by asking a patron for intercession on their behalf.

The Story and History of Eligius
The story and history of Eligius. Eligius of Noyon or Eloy (or in French, Eloi). St. Eligius is the patron of Noyon, of which city he was made bishop. Eligius, or Eloi, as a young man was apprenticed to the master of the mint at Limoges. He became an extremely accomplished metal worker specialising as a goldsmith. His reputation as an honest and accomplished goldsmith attracted the nobles of the land and eventually the French King Dagobert. He rose in importance at the French court and eventually became the chief counsellor of King Dagobert. He used his position to obtain alms (money or goods) for the poor and obtained money to to ransom captives who were being sold as slaves.

Death of Saint Eligius
There are two categories of saints: martyrs and confessors. A Christian martyr is regarded as one who is put to death for his Christian faith or convictions. Confessors are people who died natural deaths. Date of Death: Saint Eligius died in A.D. 659. Cause of Death: Natural causes.

Why is Saint Eligius the patron of Goldsmiths, Blacksmiths, Horses, Taxi Drivers  and Mechanics?
Why is Saint Eligius is the patron of Goldsmiths, Blacksmiths, Horses, Taxi Drivers  and Mechanics? Because of his former occupation as a goldsmith. Farriers and blacksmiths claim him for their patron on account of the following astounding legend. One day, when a horse was required to be shod, he plunged and kicked so much, that it was said he had the devil in him. St. Eligius was then appealed to, but instead of exorcising the devil he quietly cut off the animal's leg, placed it on an anvil and shod it properly, after which he replaced the leg by merely making the sign of the Cross. The passing of time and introduction of new technology has led to the replacement of many jobs related to horses. But the patronage of the people who do those jobs and work in those places has remained, hence Saint Eligius is now the patron of Taxi divers and mechanics.

How Saint Eligius is represented in Christian Art
It is helpful to be able to recognise Saint Eligius in paintings, stained glass windows, illuminated manuscripts, architecture and other forms of Christian art. The artistic representations reflect the life or death of saints, or an aspect of life with which the person is most closely associated. Saint Eligius is represented in Christian Art either  in Episcopal robes, holding a book in one hand, and a hammer or tongs in the other; or in a short artisan's dress with hammer and tongs. At his feet, in either case, are anvil, bellows, and other implements of the blacksmith's, locksmith's or metal-worker's craft.

In 629, Eligius was appointed Dagobert's first counselor. Later, on a mission for Dagobert, he persuaded the Breton King Judicael, to accept the authority of Dagobert. Eligius later fulfilled his desire to serve God as a priest, after being ordained in 640. Then he was made bishop of Noyon and Tournai. His apostolic zeal led him to preach in Flanders, especially Antwerp, Ghent, and Courtai where he made many converts. Eligius died on December 1, around 660, at Noyon. He is the patron of metalworkers and his feast day is December 1. The use of one's talents and wealth for the welfare of humanity is a very true reflection of the image of God. In the case of St. Eligius, he was so well liked that he attracted many to Christ. His example should encourage us to be generous in spirit and kind and happy in demeanor.
​